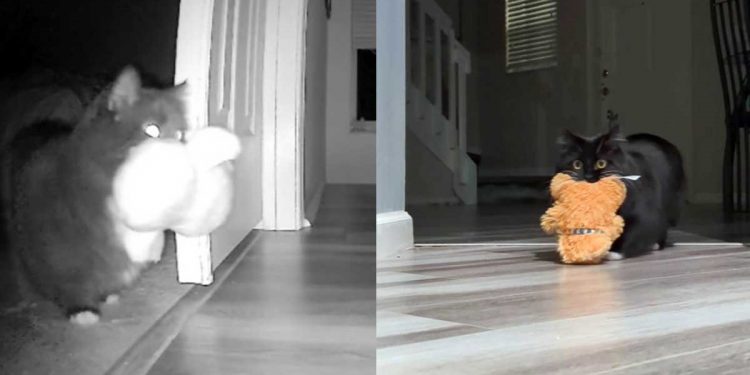 This woman manages to catch her fluffy cat stealing her daughter’s stuffed toys on a hidden camera.

A woman who feared that her daughter’s stuffed animals would keep disappearing or being found in new places decided to set up a hidden camera to find out what was going on. Apparently, her beloved munchkin cat named Batman picked out her favorite stuffed animals every night and very quietly dragged them out of the room with her mouth, up the stairs, and left them by the woman’s bed.

Christine, the cat’s adoptive mother, told Laughing Squid that she thought about installing cameras throughout the house to solve the mystery. And what he saw was something really special.

For starters, it wasn’t a ghost taking the toys and leaving them in other parts of the house. In fact, it was Batman every night who stood up for his misdeeds.

Woman surprises her cat by stealing her daughter’s stuffed animals

This particular cat routine originated when Christine, instead of giving away the toys her daughter no longer used, she saved them for Batman.

My daughter at the time had outgrown her stuffed animals and instead of giving them away we gave them to her. And then I would wake up in the morning and find toys next to my bed, on average about two per night.And I could see how he is and find exactly the one he wants,carry him up the stairs to my room.

Batman seems to be very selective about the type of toys his mother likes to bring, they are all stuffed animals with faces. The cat usually sniffs the box, looking for a toy to grab, then grabs it in its mouth and uses its little legs to adorably jump up the stairs to Christine’s room.

Sometimes Christine seems to fall asleep on the sofa in the house, so the cat leads her there. According to her, she is the only one Batman brings gifts to, however, if the feline is in too good a mood to play, she will bring small items for her husband and daughter.

Batman’s story is much more charming than that of the original Dark Knight. Christine says they had three rescue cats named Buttercup, Larry and Bambi when they searched for a Munchkin.

We had seen an article about them on Animal Planet so I did some research and found the Munchkinlane cattery. The timing was perfect as she had just had a litter. They were all girls of color cream. Batman was the only child and also the youngest.

Christine says that around the time her older alpha male cat, Buttercup, passed away, she noticed he was bringing toys into her bedroom as gifts while she slept.

Since then, it’s become a nighttime event that Batman pulls a toy out of its box or finds clothes with a drawstring or a bikini top, then carries those treasures to his mother’s bedroom while she sleeps.

Cats seem to be natural kleptomaniacs, their hunting instincts are always on high alert and these smart, cunning and stealthy felines do little more than obey them.

According to Be Chewy:

They love to attack harmless household items and pile them under beds, sofas, fridges and anywhere their hands can’t easily reach.

Whatever the reason for Batman’s behavior, the truth is that on the face of it, it only reflects the great love he has for Christine, and she’s more than happy to wake up every morning and find a present. by his side.