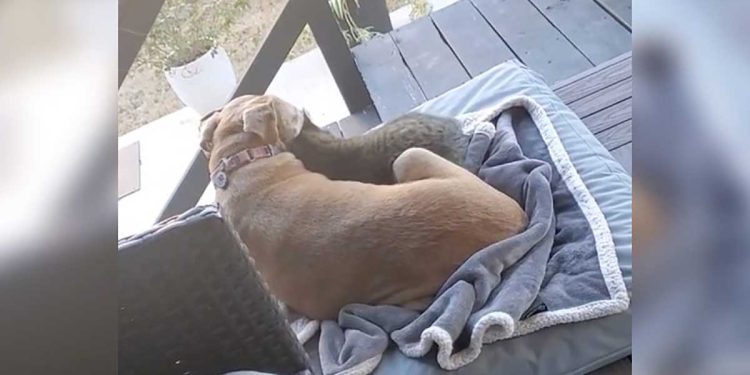 This woman caught her older dog curled up napping in the driveway next to a homeless kitten.

Cheeky is a lovely older dog who has never met a cat she doesn’t want to be friends with. The 14-year-old canine is an expert in treating felines with gentleness and love, all thanks to her calm demeanor she has developed with the kittens that Liz Heck usually fosters in her home.

Cheeky recently met a cat that turned out to be quite the challenge. A few months ago, a homeless feline started frequenting Cheeky’s porch for dinner, as Liz often leaves a plate of food for homeless animals in the neighborhood. Over time, the cat became more confident and decided to investigate the woman’s house.

She climbed the fence of our garden. My wife went to let Cheeky out, not knowing the cat was there, and she freaked out and scratched Cheeky on the nose.

Both animals were very excited about the meeting. But Liz and his wife knew the cat was there for a reason; I needed a safe place to live.

Then we slowly introduced Cheeky to the cat, letting him know we wouldn’t hurt him. Now [the cat] hasn’t left our garden or our porch for five days.

The woman hadn’t realized how close Cheeky and the kitten, whom they named Sushi, had become until she stepped outside one day to find them happily cuddled together in the sun. It was clear that the older dog had finally done his thing, winning the nervous kitten’s love.

[Sushi] loves hanging out with Cheeky when he’s out. So now we’ve put cat food for her on the back porch and put a heating pad in a box, where she sleeps at night.

Cheeky is too big for the heating pad, but he always comes out to lay on the dog’s bed or on the grass when it’s sunny, and the cat loves to rub on it and let Cheeky clean his head.

Now Sushi is getting used to the idea of ​​being part of a family and comes in at night when she’s too cold. And while the cat appreciates his independence, he clearly likes having someone to snuggle up with to nap and play.