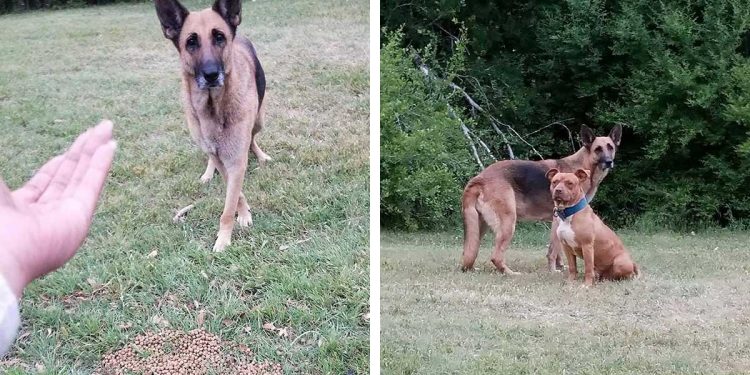 A woman, founder of an animal shelter, wins the trust of a German shepherd to rescue her and introduces her to her companion.

A woman gains the trust of a German Shepherd dog who has apparently been living in the woods for several weeks, and she introduces him to another friend who also needed help.

In 2018, Judy Obregón, founder of animal rescue organization The Abandoned Ones (TAO), wanted to rescue a homeless German Shepherd. So he headed to Echo Lake Park in Fort Worth, Texas, after receiving reports that the dog was wandering in the woods.

A woman earns the trust of a German shepherd

When she was able to find the dog, she was not very happy to be rescued, as she seemed too scared to approach anyone who wanted to help her. Her fear of humans was obvious, and every time Judy tried to get closer, the dog ran away into the woods.

I knew it was extremely urgent to capture her. Gaining her trust started with studying her every move.

The woman had to be very patient and wait several days to gain the dog’s trust, but gradually she gave in.

Although the dog named Iris initially ran every time she saw Judy’s truck, in the morning she waited to receive food.

I told him the same thing every day so he would know my voice and trust that one day his life would change. It’s very rewarding when you can change the fear they have for a smile.

Iris only came out of the woods to assess if the woman was trustworthy, but one day she decided that Judy was safe enough to approach. Later, Judy got a big surprise when Iris walked into the woods as if to show her something very important.

Iris had been offered food, but she clearly had someone to share it with, and it turned out to be a pit bull.

No one knows exactly how this pair of dogs ended up living in the woods, but it was very obvious that they were protecting each other.

The pit bull known as Clover seemed to have had quite a tough life, as his face was covered in scars. But once Iris was sure they were in good hands, she practically asked Judy to save them together, because they deserved a better life.

Judy was eventually able to rescue the two homeless dogs and immediately took them to a vet for a general checkup. Once cleared, they spent time at the rescue center to get used to human company and to benefit from some care.

In the care of the rescue center, the team realized that the dogs could be sent to different foster families without compromising their emotional well-being.

The two dogs were no longer so close, each had chosen his route to the rescue center, so they were sent to different foster homes.

Moreover, they had different needs; Iris needed more care and a quiet environment, on the other hand, Clover wanted a foster family with lots of fun.

Most importantly, both dogs thrived in their foster families, where they were able to make lots of friends and experience what a real home is like.

Iris trusted her host family a lot and revealed her true personality, where she showed that she likes to enjoy the simple things.

She likes to be bathed, brushed and even do little dances… Some would think that because of the fear she had, it would take her months to recover… This is proof that this not all stray dogs do.

Clover has also blossomed since her rescue and has formed strong friendships with the animals and children in her foster home.

Clover is actually my personal education. It is suitable for dogs, cats and children.

As much as Clover loves people, she’s definitely very close with other dogs, perhaps her friendship with Iris in the woods left her with a lasting lesson.

He…definitely needs another dog in his new home.

Iris and Clover were out of harm’s way at the time, but what they needed most was the ability to find a forever family. Luckily, the two dogs were lucky enough to find their forever homes in October 2018.

After going through a series of hardships in their lives, this sweet couple got a second chance thanks to the great work of a kind-hearted woman.

Images: Facebook / The Abandoned Ones “Saving Animals in Danger”