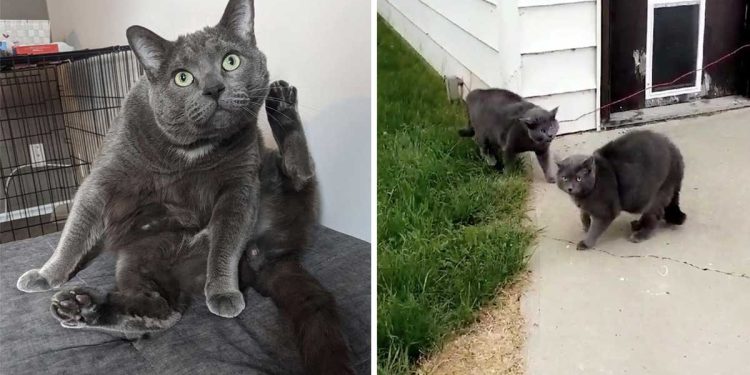 A woman working heard noises in her yard and went out to find her cat, surprised to find it with its twin.

Devi Larsen, a woman who lives in Edmonton, Alberta, Canada, witnessed a truly strange event, in which her cat named Loki was the protagonist. He has a very special personality and is quite big, so his mother thought he was the only one in his class.

One day while Devi was working, she heard a lot of noises coming from the patio of her house, when she came out, she found a clone of her cat and Loki was staring at it.

Loki is a very affectionate and friendly cat; he is always characterized by creating a friendly relationship with everyone he meets.

A woman finds her cat with her twin

When people who don’t like cats come around, he always changes his mind about them, because he’s very social and likes meeting new people.

The furry one is also very mischievous and loves spending time outdoors; every time they open the door, he runs in search of freedom.

Ever since he was a kitten, he’s always been fascinated by the outdoors. And by fascinated, I mean he runs away to lie on the ground and eat grass.

But she has never been very happy with the idea of ​​leaving her cat outside, because she is afraid that something will happen to her.

In order to make Loki happy, she came up with the idea of ​​tying him to the yard with a long leash, so he could enjoy the outdoors. When Loki wants to go out, the woman puts a leash harness on him to leave him in the yard, so she can be calm.

One day, while Devi was working on her house, she decided to leave Loki outside so he could enjoy the bright sunshine.

In the middle of a work call, Devi heard a ruckus and several grunts coming from the patio, so she hastily ended the call to see what was going on.

It turns out there were two chubby gray cats that looked like twins, so much so that Devi thought she was seeing double.

I had never seen another cat like Loki in the neighborhood before, so when I walked out and saw the scene in front of me, I was extremely confused! It took me a minute to realize that the one of them wasn’t my cat!

At that point, the woman quickly took a picture, so the scene could be recorded, posted online, and the owner of the other cat could be found. She couldn’t distinguish her cat, then she remembered that hers must have the harness; to his surprise, the harness was loose in the yard.

The strangest thing was that the two cats were angry and growling at each other, it seemed that they were not very happy to find their twin.

Seeing that the situation could get worse, Devi needed to know which cat she was to separate them and avoid a possible fight, but when she wanted to catch him, things changed.

I finally see the other cat is wearing a black harness, so I quickly grabbed Loki to stop him. Before I did that, he rushed in faster than he had ever moved in his life and squarely tackled the other cat and they hit each other.

The woman succeeded and was able to get Loki into the house; Although no cats were harmed, she ended up with numerous scratches trying to separate them. Devi had to go to the doctor and was vaccinated against tetanus and given various medications.

Devi wanted to make sure the other cat was okay, but when she tried to grab him, he quickly ran away, so she left him some food in case he came back.

From that day forward, Devi swore never to leave Loki in the yard without her care so she could avoid another situation like this.

He’s usually pretty good with other animals, since that’s how we raised him. Maybe he didn’t like what he saw in the mirror.

Also, Devi is going to build him a patio where he can enjoy the outdoors.