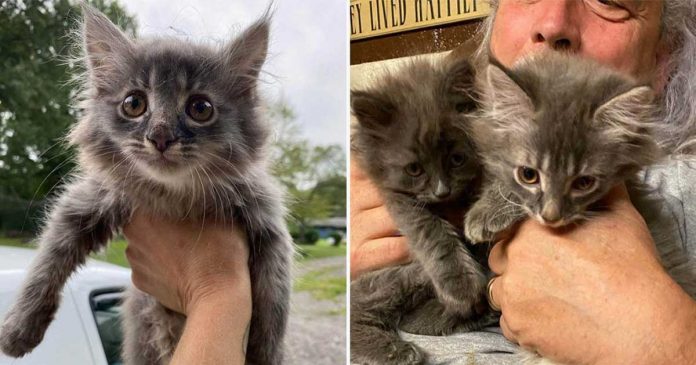 A woman who is dedicated to rescuing animals in need, helps an abandoned kitten and then rescues her little brother

A woman named Donna, who is dedicated to rescuing animals in need and caring for wild cats in a particular colony in the state of Ohio, was feeding the homeless cats in her community, and observed a kitten that was curled up in a window sill.

The poor kitten was trembling with fear, but sometimes she seemed to be petrified and she was frozen in that window waiting for someone to help her.

She was abandoned in the wild cat colony that I take care of.

Woman helps a kitten and her brother

At the time, the woman did not have a baby carrier, but she returned to her car and emptied a container in which she stored the cat food. Then, the woman approached the kitten and easily grabbed her from the window, as soon as she touched her, the little girl began to purr with happiness.

Although the kitten was very nervous, realizing that she would be safe she started her purr motor to say thank you.

Donna put her on the makeshift transporter and quickly took the kitten named Nene to her vet clinic for a general checkup.

According to several neighbors in the area, there was another kitten of the same age that was always with Nene, and after investigating it turned out to be her brother.

The house Nene was in was abandoned and in dire condition, so Donna knew that her brother needed to be rescued quickly. The woman decided to return for the remaining kitten; After looking for him she could find him, she caught him and then took him to where her sister was.

When I brought them together we saw a moving scene. The love they have is very pure and sweet.

Both kittens were infested with fleas, hungry and in dire need of medical attention, but with a lot of love they were able to recover quickly.

After receiving good food, undergoing a veterinary check-up and taking an antiparasitic and flea treatment, the two kittens were as good as new.

The little kitten named Nico had a lot of fluff and was much thinner than Nene, but he took on the role of older brother and took care of his sister. Nico figured out how to perform the different activities of a normal cat, like using the litter box, and Nene just followed in his footsteps.

The sibling duo quickly got over their time in the pen and moved to a place with much more room to run and play.

They had a blast with more space and plenty of toys. They play hard with each other, but the moment you touch them, they start purring. They are pure joy.

Soon Nene and Nico met another foster kitten named Willow, and they accepted her as if she were her own sister and created a beautiful bond. But there is really nothing that can overcome the beautiful bond that Nene and Nico have; they love to cuddle and purr, they do everything together.

After being in foster care for several weeks, they put the two brothers up for adoption, through Cats are People Too Club, Inc. They all hoped that a kind-hearted family would adopt them and bring them home together, luckily, the best news came.

A family decided to give them the home they were looking for so much, and the best thing is that it gave them the opportunity to stay together forever.

Nico and NeNe have found their family and can stay together! There are no words to describe the joy of all.

After going through an unpleasant experience, the two feline brothers now enjoy the comforts of their warm new home.