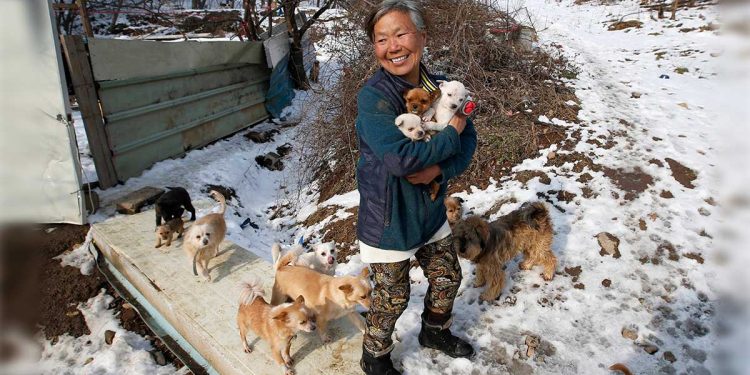 Today, more and more people are doing something to change the cruel fate of some innocently sacrificed dogs. But without a doubt, this South Korean woman is a hero.

Jung Myoung Sook is a 61-year-old woman from South Korea who has been rescuing dogs to be sold to restaurants for 26 years. In South Korea, dogs are considered a real delicacy and not long ago they started to be considered as pets.

While to some Jung’s love of dogs is considered odd, to others she is seen as an animal advocate.

To date, Jung is home to over 200 dogs, which is why she was forced to move 7 times because neighbors complained about the noise. She adopts dogs that roam the streets and buys some that risk being sold to dog meat farms or restaurants.

Many wonder how someone as humble as Jung who makes a living cleaning up a store and picking up recyclable boxes can feed and care for so many dogs.

Following a visit by The Associated Press to Jung’s home, they said the dogs were healthy and well fed, although their condition could not be independently confirmed.

Most of the dogs live with her, although she tries to find them an adoptive home. She spends about $1,600 a month on food and medicine, relying for the rest on donations of soy milk, dog food and canned meat sent to her by her own family, friends and even strangers.

Additionally, the owner of a local restaurant has given Jung leftover food for the past four years.

My babies are not hungry; they can play freely and live here. Some people talk about me saying, “Why can that old beggar woman smile all the time?”, I only focus on my children being well fed. I am happy and healthy.

Many Koreans believe that the only thing this woman does is save countless dogs from unsanitary conditions, which makes it easier to spread disease. To which the woman replies that most of her dogs are healthy and only a few die in fights with each other.

Jung’s followers see her as a hero, as she saves many stray or stray dogs from being killed for food and saves others from euthanasia in public shelters.

According to the government, around 81,000 lost and abandoned animals (mostly dogs and cats) were sent to public shelters in 2014.

The only thing this woman does is live for her dogs, without doing much for herself.