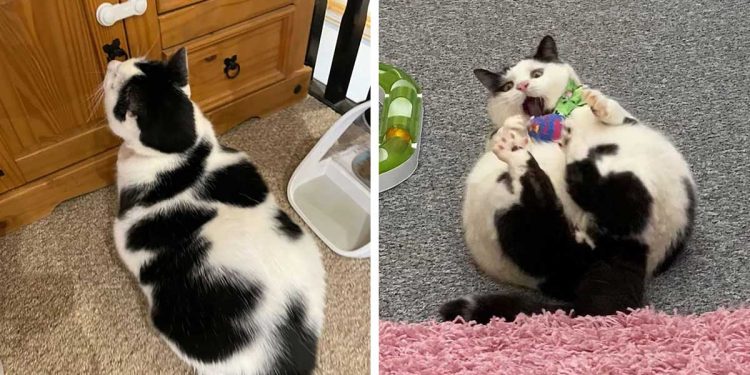 To stop her food-obsessed cat from stealing food, a woman locks the fridge and cupboards.

Since Sara Matthews decided to adopt Keith, her rescue cat, as a birthday present for her daughter Charlie, she knew he had several medical issues. When he arrived at the animal shelter, Keith was severely malnourished and had gastrointestinal issues, so he had to follow a rather special diet.

However, from then on, the kitten showed great love for food and even came out of the cage to steal food from other cats.

The woman worked as a volunteer at the animal shelter, so her daughter Charlie met the adorable kitten when she needed a home.

Charlie fell in love with him straight away, so I adopted him for her as a surprise birthday present.

What they never imagined was that after adopting him, Keith would become a big man, due to his insatiable love of food.

They are so eager to find food that Sara has had to put childproof locks on her fridge and some cupboards.

Despite efforts to keep Keith from finding food, multiple diets and visits to the vet, the kitten went from 11 to 24 pounds.

He is about the size of a medium-sized dog, and for the past seven years the kitten has grown steadily.

We’ve had child locks on the fridge since we had Keith. At first it would come up when I opened it, and I was worried it would get stuck without us noticing.

It is that no matter what type of handle the food cabinets have, whether circular or pulley, it always finds a way to enter.

The woman claims that one of the last cupboards she checked for Keith had a heavy trash bag in front of it. But the cunning cat managed to push the bag aside and managed to reach the food bags, achieving his goal.

Now I have had to put all their rations in plastic containers with opening lids. We tried puzzle loaders to slow it down, but it just flipped them.

Keith loves food, he will even eat anything, he loves green foods, so vegetables are not spared his big appetite.

Knowing of Keith’s diet problem, the vets put him on a special diet and made other adjustments at home. For example, the other cats in the house have special bowls, which means that only they can use it, thanks to a microchip.

However, Keith continued to gain weight and they soon discovered that he had been scouring neighbors’ trash cans for food. Apparently, he thought he didn’t have enough food at home, so he loved rummaging through trash cans so he could eat whatever he found.

We had to put tags on it asking people not to feed it.

After moving Sara decided that Keith would be an indoor cat to avoid litter box poisoning. But that meant he would be less active, even though he had several items in his house that could contribute to his exercise entertainment.

The truth is that his family spent a lot of money all these years looking for a solution.

To get a rough estimate, a bag of special food costs £70 and he’s been on that diet for three long years.

Although Keith took many tests to find out the reason for his eating problem, nothing was conclusive and they still don’t know the reason. The adorable kitty may be limited to just 50 grams of food a day, but he still shows determination when it comes to supplementing his diet.

Although bigger than a normal cat his age, Keith enjoys his life and loves playing with Charlie, who has autism.

He has never seen his weight as a problem, he is even more active than the other cats in his house and he shows it when he plays. He loves to run and play ball, sometimes he looks more like a dog than a cat, although he is more of an escape artist.

Although Keith has no medical issues, his family wants to prevent something from happening in the future, so they will try to impose their diet.