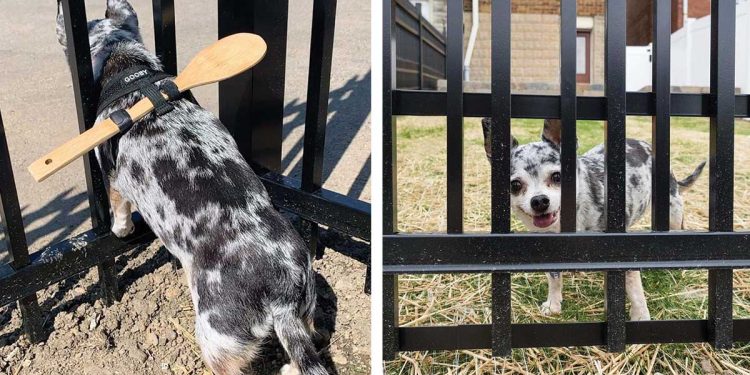 A woman tired of seeing her dog escape through the garden fence ends up defeating her using a rather smart trick.

Julia Morley came to an animal shelter in Pittsburgh, Pennsylvania with the intention of helping an animal in need and giving it a forever home. It was there that he first saw Lu-Seal, a friendly chihuahua who could barely walk because she was overweight.

Lu-Seal weighed around 16 pounds, which worried everyone, as it was twice the healthy weight of a normal dog his size. Despite her problems, Julia decided to bring her dog home, and since her arrival she has started a diet that has allowed her to lose weight.

Woman outsmarts her dog with a trick

I put her on a diet, accompanied her as much as I could and the pounds came off, she is a healthy weight and doing great.

It has been four years since Lu-Seal arrived in her new home, she is now 9 years old, but she is healthier and more active than ever.

His weight loss became evident when his mother decided to install a new fence in the garden, as the dog easily walked through it.

It never occurred to me that she would fit through the bars of the fence when I picked her up, but as soon as she was installed it was clear she would be a problem.

Since then, the mischievous Lu-Seal has often snuck through the fence, mostly to visit his neighbor Eddie. Usually, Eddie always gives the dog his good treats, so she won’t let a fence get in the way of him going to visit.

Lu-Seal was determined to cross the fence as many times as she needed to get her treats, a problem that turned into a challenge. Julia decided to post her problem on Instagram to see if anyone had a workaround, and she really did.

One of the dog’s followers said the best solution was to place a “safety spoon” on Lu-Seal’s back. The idea seemed a bit far-fetched and it was hardly believable that it could work, but the result was effective, and above all very funny.

I attached the spoon to his harness with velcro ties and it worked. We only use him as a temporary resource.

Lu-Seal was so determined to get over the fence that she didn’t even realize she had a spoon on her back, but she kept trying. At the time, the dog was convinced that one of her attempts would work, but she finally had to give up.

Later, the person in charge of building the fence installed smaller bars to prevent the dog from escaping, ending the problem.

Lu-Seal has given up trying to find a way through the fence, but that doesn’t mean he’s given up on his neighbor’s treats.

Lu-Seal is unerringly optimistic. She has a permanent smile on her face and nothing seems to stop her.

Every time he sees his friend Eddie, he runs to the door and lets his mother know that he has to visit his neighbor for a reward.