Elliot was found on the ground in Muskegon, Michigan (USA) in critical condition. His body temperature was only 94 degrees when they took him to the vet and he couldn't open his eyes because of the scabs on him, but with dedication and help he showed improvement. 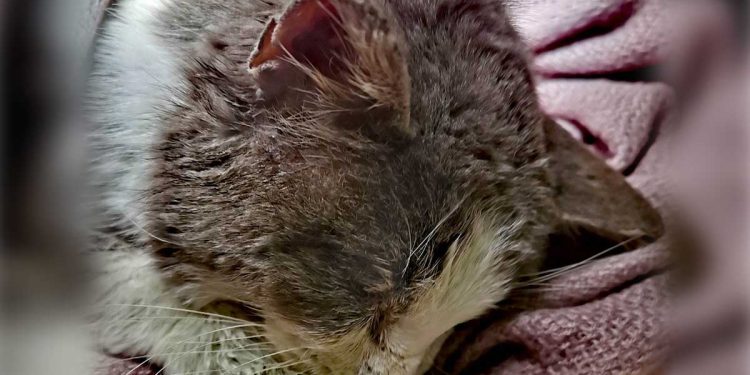 Winter is the favorite season for many, but not for animals that don’t have a warm place to shelter, so they depend on their luck to find a roof, a tree or a cave that will protect them.

Fortunately, there are good people who do not pass when they see that their life is in danger and take them to safe places as they deserve. Like a woman named Kelly who saved Elliot, a cat who braved the cruel cold.

Kelly found the cat on the ground at Laketon and Wood St. in Muskegon, Michigan (USA) one morning, and didn’t hesitate to help it when he noticed it was frozen solid after a major winter storm.

The woman knew what to do and took him to the Big Lake Community Animal Clinic for help as his body temperature was 34 degrees Celsius and his eyes were crusted shut, in addition to checking if he had an electronic chip.

According to what was reported by the organization on Facebook, the vet and staff quickly began treatment with warm intravenous fluids, as he was very weak from everything he had been through and was dependent on professionals.

The team took it upon themselves to keep him warm and wipe his eyes, as well as check his body for any wounds that needed to be treated.

Thanks to his good work and dedication, the cat came out of critical condition and started to feel better, so they named him after Elliot after the storm. “Happy to say he is now resting comfortably!” the organization wrote on Facebook, showing images to provide an update on the situation of the feline who fought for his life.

“Thank you again Kelly for saving Elliot from a horrible death!” He added, where they have also made a phone number available in case anyone recognizes Elliot or wants to help with medical bills, and for the same reason they have opened a donation button in the social network.

The Big Lake Community Animal Clinic has kept fans updated on Elliot’s health, thankfully he is eating and looking much better as he continues to rest and receive donations for his cause.

All in the hope that he makes a full recovery!