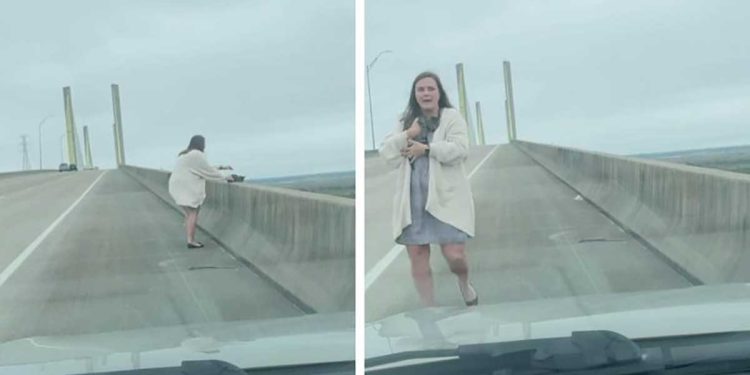 This woman sees a little kitten at the edge of a road bridge and decides to rescue her and bring her home.

As Nicole Toney drove her car over a bridge on her way home, she saw something that immediately stopped her heart for a moment; wobbling on the edge of the bridge, a lonely little kitten was observed.

As soon as Nicole reacted to what she was seeing, she knew the cat definitely needed help and turned around as quickly as she could, hoping she was still there.

The woman told The Dodo:

I wanted to vomit. I was really nervous because she wasn’t going to be there when I turned around.

Nicole pulled up on the busy highway and was thrilled to see the cat again. The woman was afraid that the feline would be startled by her car, so she did not stop very close and did her best to approach cautiously at the time.

I approached her slowly because I was afraid of heights and I was afraid she would jump, then I just wanted to make sure I was getting really close to her so I could put my arm behind her, so if she fell off the bridge, I could try to catch her. Then I grabbed the back of the neck and pinned it like mother cats carry them around the neck.

During the rescue, the kitten barely moved, indicating she was terrified and, although she was very nervous to see a stranger approaching, she seemed to understand that Nicole was there to help her.

She didn’t whistle, she didn’t scratch; I think she was too scared to move. She just said, ‘Okay, great, someone saved me!’

When Nicole finally put the little cat in the car, she was happy. She had been very worried, but managed to save her. The feline simply sat in the car while the woman drove home.

Along the way, Nicole called her husband and told him everything that had happened. They already had five dogs and a cat, but he didn’t hesitate to tell her to bring the kitten home and they would sort everything out there.

He said, ‘OK, well, we’ll talk about it after work’ and we never really talked about it, we just kept it.

The couple decided to name the feline Ducky because she was lucky enough to survive her ordeal. The family previously had two cats at home, Nigel and Mabel, but Mabel disappeared a few years ago. They now hoped that Ducky could be a new friend for Nigel after losing his sister.

She looks a lot like [Mabel]. I was like, ‘Man, we definitely have to keep her!’ I felt bad that Nigel didn’t have his sister anymore and I was like, ‘She can be his sister.

It’s been a while since Ducky was rescued and she’s very happy in her new home. She’s still a little nervous after everything she’s been through, but she loves her new family very much.

She’s quite playful, she’s sweet, I don’t think she’s fully come out of her shell yet.