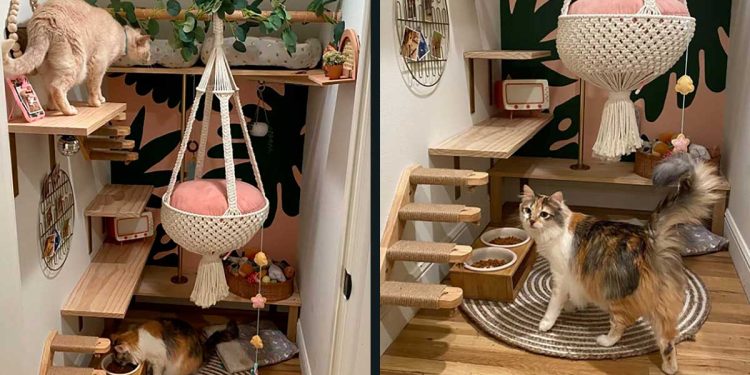 This woman decides to transform the cupboard under the stairs into a charming bedroom for her two cats.

Peggy White, a woman from Oklahoma, USA, decided to take advantage of a space in her home and with a little creativity and feline love, she managed to transform the closet under the stairs into a a nice room for her cats, where her dogs do they can’t enter.

The woman has installed beautiful shelving so her cats Guliver, 15, and Frankie, four, have a quiet space to themselves, has also installed a spinning bed and a faux branch for them to play with.

It’s a quiet, relaxing place where the cats can eat their food.

At first, I transformed the closet for my cat named Herman, who was diagnosed with kidney failure at the age of eight. I wanted to make him a special place before he died.

Now the cozy space is enjoyed by Guliver and Frankie. The closet has several comfy beds for them to enjoy their naps on and a floral accent wall that adds a cozy touch. The project cost about $200 and took Peggy two weeks.

She also decided to add stairs and a platform with an adorable disco ball, as well as lots of toys to give the place some flair.

A lot of people are surprised when they see what I’ve done with the space. They asked if they could move in because they love the decor. While some people accused me of locking them in the closet because that they didn’t realize there was a cat flap in the back.

Even Frankie, the youngest cat, has been embarrassed by internet trolls after his adoptive mother shared a bit of her routine on social media, although that seems to be the feline’s least interest.

Most of the comments online have been positive, but some people said Frankie was overweight. But he was wild, so he eats every meal like it’s his last. My cat has a great life and is happy, so I don’t mind negative comments.