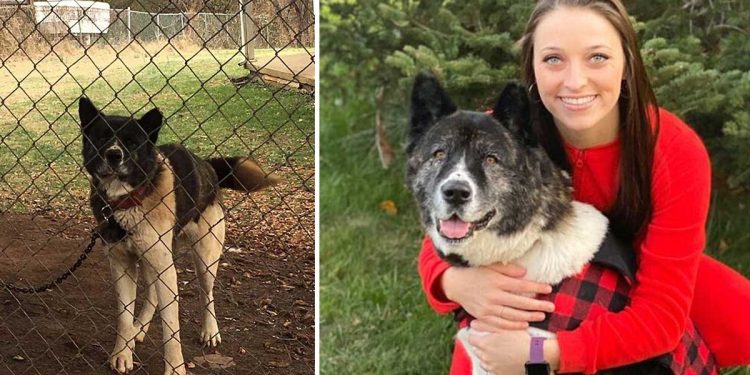 A woman who visited a dog chained to a tree for a year, to bring her food and water, was finally able to adopt her.

Laura Seymour had to overcome many obstacles throughout the entire process of rescuing the dog named Takia, but she did not give up and gave the dog the life that she always deserved.

It all started when Laura found on her way a dog chained to a tree in the backyard of a heartless person. Being an animal lover, Laura immediately went to the fence of the house to take a closer look at the situation and greet her new furry friend.

When the woman got close enough to watch, she wasn’t sure how the big Akita would react, so she exercised extra caution. To her surprise, the dog immediately began wagging her tail and expressing happiness, greeting her with endless showers of kisses.

After getting to know each other, trusting each other and greeting each other enough, Laura began to notice the seriousness of the situation that the dog was facing in the garden.

It was evident that the friendly canine spent most of her time outdoors, as her fur was soaking wet and she had a hole in the ground that she used as a makeshift bed. Also, she had two bowls near the tree, both of which were empty, which meant that she likely had no access to food or water.

Because of this, Laura became worried about Takia and started stopping by the place several times a week, in order to bring food to her chained friend.

As the days and visits passed, the loving dog became more and more excited for her arrival and was happy to see her. Within a few days, Takia began to recognize Laura’s car, and when she pulled up in front of her, she would start an adorable dance of happiness.

Both began to establish a wonderful bond of friendship, and Laura was clear that she had to do something to free her friend from her cruel life.

So, the woman decided to contact Animal Control to make them aware of the situation, a few weeks after meeting Takia. But, after making the respective visit to the house, they informed him that as long as the owners offered him a roof, water and food, they could not do anything.

Laura was heartbroken, but she didn’t want to give up her new friend, so she told animal control that she would continue to visit her. She wanted to make sure Takia had enough food and water, since whenever she came her bowls were almost always empty.

Animal control agreed with Laura’s proposal, and she also told her to contact them again if the situation worsened. She visited Takia for a whole year, winter came, and the poor little dog had to endure all this time outdoors.

But what really worried Laura was the arrival of the strong heat in summer, because she knew that the animal would suffer without adequate care.

It wasn’t fair to her, and her hands were tied, so she decided to make one last desperate plea to animal control.

When they found out that Takia’s family refused to give her proper care, they forced them to hand her over.

Once Takia was released from her chain, she was put up for adoption and Laura was first on the list to adopt her. After going through the entire adoption process and finally being able to take her friend to her new home, that’s when she named her Takia.

As soon as we got home, she was very used to doing nothing all day. Now, the moment she can run, she does. She is a new dog.

When the story of Laura and Takia was revealed in a video, a woman commented that she was a neighbor of the previous owners of the animal. She gave details of what happened and added that she was very concerned for the welfare of the dog, and called animal control.

I’m so glad she got it! I live next to her, we also fed her and called animal control and they told us the same thing. My husband brought him food and water, my sister-in-law who lives across the street too. So, animal control must have thought the owner was doing it, but he never did. I am so happy that she has a good home!

Now Takia lives her days in the comfort of her new home, surrounded by love and attention, as she was always meant to be. She enjoys the daily adventures with her adoptive mother and even though she may not be able to make up for the years of suffering, her future is filled with much love and happiness.