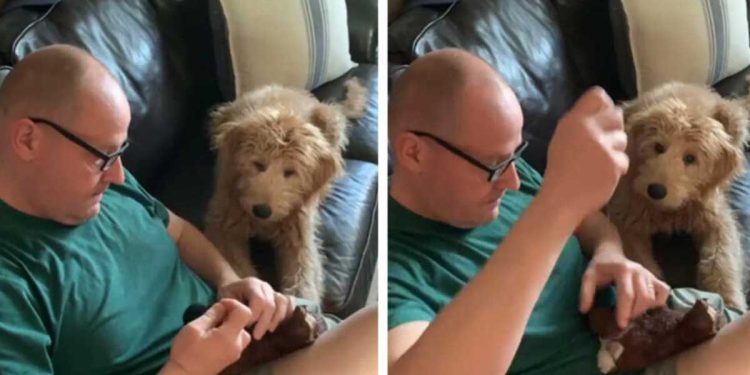 This worried dog named Leo was never far from his favorite stuffed toy while it was being repaired.

This cute dog from Latham, New York patiently watches his favorite toy being stitched up in this adorable video. Leo was paralyzed when the stuffed animal was hospitalized for “surgery”.

This fluffy dog ​​clearly loves his family, but there’s something else he loves: a brown stuffed animal that he takes with him everywhere.

The other day, Leo was playing with his stuffed animal, as usual, when the drama happened. Somehow, the eager dog managed to accidentally rip a hole in his fabric little friend, exposing his soft, white interior, a life-threatening injury to any plush toy.

A worried dog watches his father sew his toy

But her father quickly intervened to prevent a graphic scene from unfolding. Obviously, the dog was devastated.

The man took the toy from Leo so he couldn’t reach it, and Leo cried as he tried to take it. That’s when Dad decided to pull out his sewing kit and started sewing it again.

During the emergency “surgery” to save the life of his favorite toy, Leo, worried about the situation, never left him.

He sat next to the toy, like someone at the bedside of a hospital patient, and watched every stitch that was made to him.

After several tense moments, the operation was over and Leo couldn’t have been more relieved.

My dad loves his dogs. This video of my dad and Leo sewing their favorite toy has to be the purest thing I’ve ever seen. This is the first time I’ve seen him sew a dog toy.

After that, the dog and his toy were happily reunited.

A post shared by Rowan, Otis, and Leo Alaxanian (@beefandbones)

Going forward, Leo will learn to be a little nicer to his cuddly friend, but no doubt Hayley’s dad will be there to help once again if any more toy-related injuries arise. Her relationship with Leo, after all, is one of pure love.

It’s the sweetest thing ever.

I took a video this morning of Leo waiting for my dad to sew up his favorite toy after he opened it… My sister posted it on @reddit and a complete stranger painted this picture within minutes. I don’t can’t stop laughing…I haven’t cried laughing in a long time.

My dad has threatened us all if we post, but that’s too good.

Rowan the Labrador nicknamed ‘Beef’ and Leo the goldendoodle, aka ‘Bones’ have their own Instagram page, don’t forget to follow them.