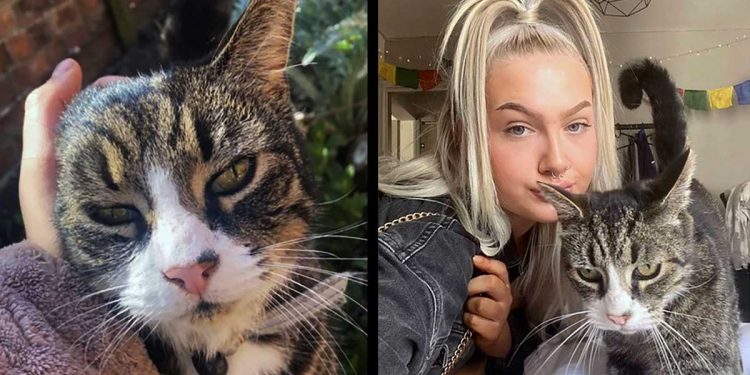 Woman who was worried about how her cat was drinking water realizes the reason for her thirst was hilarious.

A woman was worried about how her cat was drinking water, especially since it kept drinking and did so repeatedly. Poppy Anderson saw her 10-year-old cat named Brioche drinking alarming amounts of water, a situation that indicated she had something wrong.

Worried about her cat, the young woman decided to pay around 200 euros in veterinary consultations to find out what her problem was.

Poppy thought she might be suffering from kidney failure, but there was actually a less serious and very amusing reason.

He drank so much water and when he was in the garden, he drank from the watering can. He was desperate.

The first thing his family thought was that he had kidney problems, as drinking excessive amounts of water could be a sign. In addition, they had already had a cat that unfortunately died of kidney problems, so they did not want to go through the same thing again.

But after taking him to the vet and tests showing he was fine, Poppy began to investigate the possible cause.

After analyzing various situations, a few events coincided, when her family started hanging chili peppers in the kitchen. The cat had apparently chewed on some chili flakes in the kitchen, as several flakes ended up on the floor and Brioche picked them up.

My mum was trying to figure out what it was and the only thing that changed was we were hanging chili peppers.

Chilli residue fell near his trough, and while he ate, Brioche apparently thought, I’ll have some!”

The real reason for her thirst turned out to be hilarious, but her family made sure to hang the chilies somewhere else to avoid mishaps.

He hasn’t eaten chili flakes since the incident, but he’s still trying to get our food.

The curious accident turned into such a funny situation that Poppy decided to share it on TikTok so people know the story.

Now, the video has managed to rack up over 580,000 views, becoming a viral and fun post for everyone who sees it.

But the most important thing in this story is that Brioche is fine and it was only because of her curiosity that the little incident with the chili pepper happened.