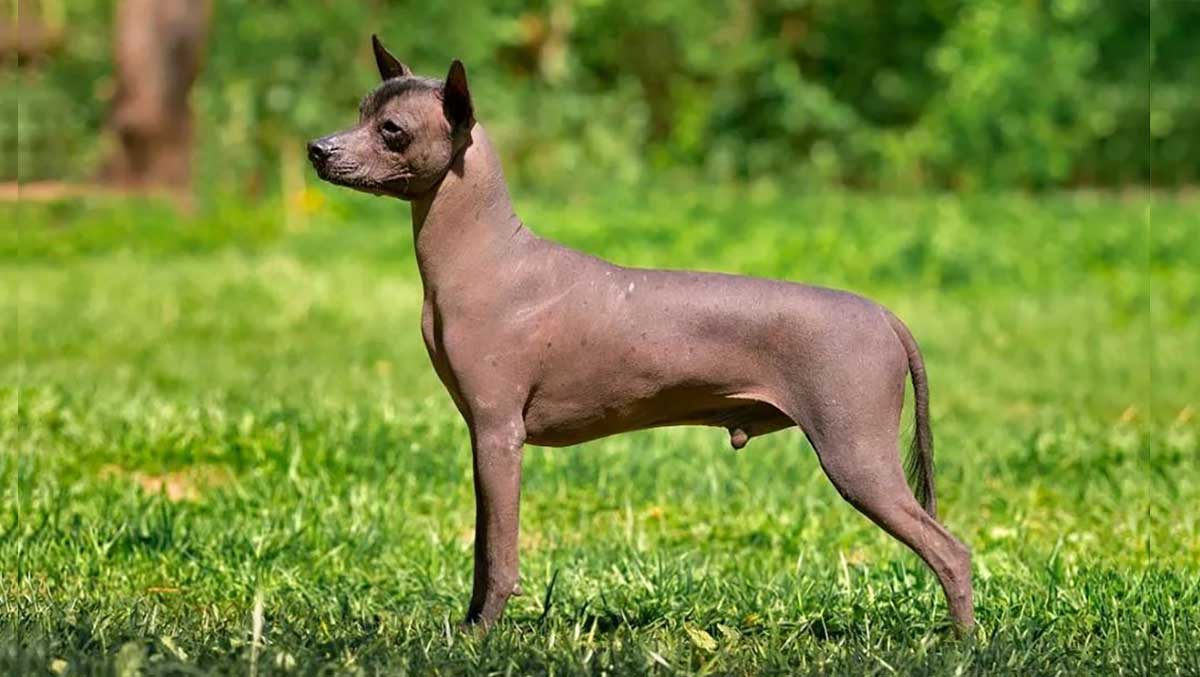 One of the treasures of Mexico is the Xoloitzcuintle or the Xolo dog breed. Due to the lack of hair, these animals are called “Mexican hairless dogs”. They belong to the oldest species.

The Xolo is a breed of dog from Mexico, one of the oldest and also one of the purest. It is a breed whose main characteristic is that it is hairless, although sometimes specimens with a golden or orange coat appear. This characteristic does not come from a genetic mutation, but comes from the breed itself, which means that there was no interference from humans to reach this special animal.

In ancient times, xolo was endowed with the ability to protect the home of the owners from evil spirits and from people with bad intentions.

In this ‘ Pets Feed ‘ breed sheet, we are going to share with you all you need to know about this wonderful dog.

Physical characteristics of the Xolo dog

The Xolo dog is a generally medium-sized dog, with a solid and proportioned appearance, which can also be presented in other sizes, so there is no homogeneity in the breed. In addition to its striking characteristic of the absence of hair, it also attracts attention because of the shape of its head and ears, very large and erect, of triangular shape.

He also has folds or wrinkles around his body and striking dark eyes which are always alert. Its body is slim in all sizes, the neck is long, and the legs are sturdy and solid.

The third variant is that known under the name of toy or miniature xoloitzcuintle, which measures only 23 to 26 centimeters and measures between 2 and 7 kilos. A big difference in proportions which allows everyone to find a Mexican dog adapted to their type of life, whatever it is.

Exposure to external agents of the Xolo dog skin is maximum, making it an animal extremely sensitive to problems such as temperature changes, sun exposure, etc. It is a breed that requires constant care to avoid reactions or conditions in its body. Oils and moisturizers are essential to take care of your skin and always be soft and healthy.

In addition, it is recommended to cover them with dog clothes when you go outside in winter. The Aztec dog can have various shades on its skin, the most common being black and all generally dark. It is not uncommon to find brown, gray or reddish xolos, with fun effects on sparse hair that appears on the head or tail. On the other hand, specimens of furry Xolo dogs are generally reddish in color and attract much less attention as their type resembles that of any mongrel dog, although they are basically the same as the bald xolo , with the only difference in hair.

Character and temperament of the Xolo dog

The international classification classifies standard and medium-sized xoloitzcuintles as guard dogs, and the miniature variety as companion dogs. Xolo is a gentle and very loyal friendly dog, but at the same time he is very vigilant, careful and attentive.

A calm, balanced and innate temperament does not allow him to show excessive aggression, but this dog does not feel warm feelings towards strangers and other dogs. Any owner of a Xolo dog will agree that it is a very special breed in all its aspects.

It is an affectionate and cheerful animal, as well as playful, although it can be somewhat shy with strangers. It is a particularly affectionate dog and easy to treat and train, because it always shows a good predisposition to please its owners and to obey orders.

In addition, he is very intelligent, so he learns very quickly, as long as he is positively trained. The xoloitzcuintle is very cute and is full of energy that it will want to exhaust in the company of its family, so it requires more attention than the other breeds of dogs, almost constant walks and games. It adapts perfectly to life in the countryside or in the city, and to families with children or only with adults, as long as its exercise needs are met.

Xoloitzcuintle is a breed that appeared thanks to nature; therefore, these dogs are distinguished by good health, endurance and strong immunity. With proper care, a Xolo can live 12-15 years.

In order for the dog to get sick less often, the owner must carry out timely vaccinations, routine examinations in the clinic and treatment against internal, external parasites. It is also important to know what diseases the representatives of the Xoloitzcuintle breed are predisposed to:

You need to keep a Xolo dog in the house, in an aviary, such a dog cannot live on the outside. A small dog will not take up a lot of space in the apartment, besides, it does not have a specific smell.

From the first days we equip a corner for the pet. There should be a bed, toys, a bowl of clean, cool water. Although many people install containers for water and food in the kitchen. It should be borne in mind that the Xolo bed should not be located near heating devices or in a draft. If the house is not warm enough, a bald dog will need a blanket and clothing during the cold season.

We take walks with the Xolo twice a day. If the weather is bad, we reduce the walking time to a minimum. In the summertime, you need to ensure that the delicate skin of the Mexican hairless dog does not suffer from sunburn. In summer, it is recommended to walk early in the morning and at sunset.

Taking care of the Xoloitzcuintle is not difficult, but the procedures listed below should be done regularly:

Xolo dogs can be fed with commercial foods or natural foods. In the first case, we buy a premium class food for the pet, choosing it in accordance with the dog’s age. In the second case, we compose a diet, providing Xolo with balanced nutrition with high-quality products and vitamin and mineral supplements.

We closely follow the feeding norms. The Mexican dog is prone to overeating, which can quickly gain excess weight and become obese. It is recommended to use the help of a veterinarian who, after examination, will tell you how much servings the dog should have. Clean and fresh water should be available to the dog at any time of the day.

The Mexican hairless dog requires about half an hour of daily exercise, and those of medium and large size, about an hour. Make sure they are well protected from the weather (cold and heat) before walking.

Without proper training, the Mexican Hairless Dog can cause many problems for its owner. An uncontrollable dog, due to its activity and curiosity, can harm even itself.

It is not difficult to educate and teach the Xolo dog different commands, rules of conduct. These dogs are very intelligent, they quickly memorize training lessons and fulfill requirements. They have a great memory. But for the sake of such a result, the owner must be an authority for the pet, whose word is law.

Although aggressiveness is not characteristic of the Xolo, he tends to dominate and loves to arrange fights with other people’s dogs. This behavior must be suppressed, like any manifestation of aggression. The hairless Mexican dog is not made for fighting. Her skin is too delicate, not covered with fur. So after even minor conflicts, your pet can get injured and scars.

In Mexico, the Xoloitzcuintle is a national treasure.

The Xolo dog was considered an earthly representative of the god Sholotl (from this name). The purpose of these dogs was to accompany souls to the afterlife. The owner’s funeral ended with the murder of his Xolo, after which the dog’s flesh was eaten.

Xolo notifies the owners of the arrival of strangers by fussy throwing around the house.

The Xolo breed is quite rightly called exotic. Indeed, on the street during a walk, a Mexican hairless dog does not go unnoticed by passers-by. But to have a pet in the form of a Xolo just because of its unusual appearance is not worth it.

This animal requires a lot of attention, so it is not suitable for people who are too busy. Before buying a puppy, check out the main pros and cons of the Mexican Hairless Dog.

Xolo’s homeland is Mexico. The history of the Mexican Hairless Dog began over 4000 years ago. On Mexican lands, archaeologists managed to find ancient burials, in which not only statuettes in the form of shoo dogs were found, but also mummies of these animals, dated 5000-3000 years BC.

The finds were divided into two types, some were completely naked, on the other figures were strokes that imply the presence of wool. The breed is so ancient that according to some information, its representatives can be considered the first companions of man.

For sure, no one can explain the reason for the appearance of dogs without hair. The most truthful version is a spontaneous genetic mutation. The Xolo dog breed is unique in that only nature participated in its formation through natural selection. Man did not in any way influence the formation of Mexican hairless dogs.

There are sad periods in the history of Xolo. There was a time when the breed was on the brink of extinction. When Mexico was conquered by the Spaniards, bald dogs were declared an object of pagan worship. The conquerors began mass extermination of the Xolo.

For their revival, the breed representatives should thank Norman Wright. It was this man in 1954, having traveled around many small deaf Mexican villages, bought more than a dozen hairless dogs. They became the foundation of the Xolo revival. Two years later, the Xolo dog was officially recognized in its homeland. The number of representatives of the breed grew steadily, as did their popularity.