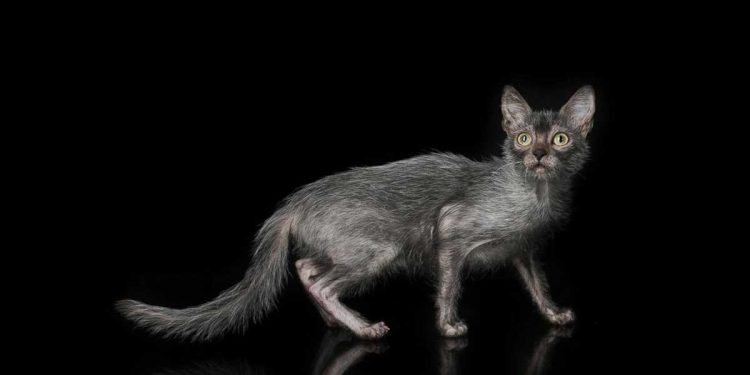 The Lykoi cat (also werewolf) is a recently bred cat breed with a strange appearance that makes them look like werewolves.

Lykoi was originally thought to be a type of Sphynx or Devon Rex cat, but has been proven not to be. In studies conducted by American scientists, it was found that kittens of this breed appeared even before the breed itself was bred by breeders.

The first impression of representatives of this breed is the partial absence of wool. These cats have bare paws, small bald patches around the eyes and on the nose. Experts say this selective hairlessness is the result of a natural mutation. As for the color of this breed, it is only gray with gray hairs. But the half-naked parts of the body are translucent with pink thin skin. A characteristic feature of representatives of Lykoi cats are large round yellow eyes. They just give the animals an extra mysticism. Many breeders claim that the muzzle of the wolfcat resembles that of bats. And although these cats can hardly be called cute, they are very popular. Their wool grows in patches, it looks intimidating, but the cats themselves are very pleasant to the touch.

They are kind, gentle, affectionate, friendly. The Lykoi cat simply likes to be near the owner. As for other character traits of representatives of the breed, these are activity and playfulness. You can rarely see them lying on the sofa. Cats and cats spend a lot of time in entertainment, active games. In general, in essence, Lykoi cats are real hunters. They love chasing balls, catching insects and chasing prey. Their behavior at home is very reminiscent of the fun of puppies. But owners should take into account that the hunting instincts of these animals sometimes cross the game line. In real life, the Lykoi cat can rush at a stranger, a stranger. It should also be borne in mind that these cats are difficult to train due to their wild nature. But that does not mean that they are devoid of intelligence. The Lykoi cat perfectly remembers the rules of life in the apartment established by the owner, behavior with him. Practice shows that the mutual love and trust of such a cat and the owner helps to find the key to mutual understanding. As for the purpose of Lykoi cats, they are cats for apartment life.

The only drawback in the care and maintenance of this breed of animals is their strong molting. They lose frequently and quickly. This is why they can remain completely hairless. Then cats and kittens require more thorough care, such as caring for sphinxes. They have a great need for warmth, which means that a warm blouse or overalls will not be superfluous.

The diet of these cats must be satisfactory and balanced. They should be offered boiled meat and fish. It is also useful to feed animals with cottage cheese and fermented milk products once a week. Lykoi cats love eggs, offal.

Pet vitamin complexes should be prescribed by a veterinarian.

The Lykoi’s immune system is strong. Well-groomed cats of this breed live an average of 15-17 years.

Cats are not susceptible to genetic diseases. The main thing is to monitor the health of the animal: put preventive vaccinations, treat parasites every 3 months.

Werecats love to associate with their owners. There have been instances when a Lykoi fought off a large dog in order to protect a person.

The Lykoi cat appeared by accident when a group of American breeders were working on breeding hairless cat breeds. As a result of a natural mutation, the kittens were born with bald patches on the nose, around the eyes, on the ears and muzzle, covered with sparse gray-black hair, through which folds of thin skin were visible here and there. As it turned out after DNA analysis, Lykoi cats are a variety of short-haired domestic breeds, and not sphinxes, overgrown with shreds of wool, as previously thought. Similar mutations have occurred before, but no one has seriously thought about continuing to breed this breed.

In July 2010, when a pair of unusual kittens was born to a black shorthair cat, breeders in Tennessee decided to continue the experiment. First of all, everyone wanted to know if it was really a natural mutation and not a manifestation of the disease. To answer this question, the kittens underwent a thorough medical examination. Little faces visited a cardiologist, a dermatologist, took blood, DNA tests and many more. The verdict of the doctors was unanimous – the kittens are healthy, and their appearance is not the result of any disease.

Having received the green light, the breeders first crossed the female and the male Lykoi, and the cat born on September 14, 2011 was named Datsiana. In 2012, the Lykoi cat breed received “registered breed” status from TICA, the largest felinological association in the world.