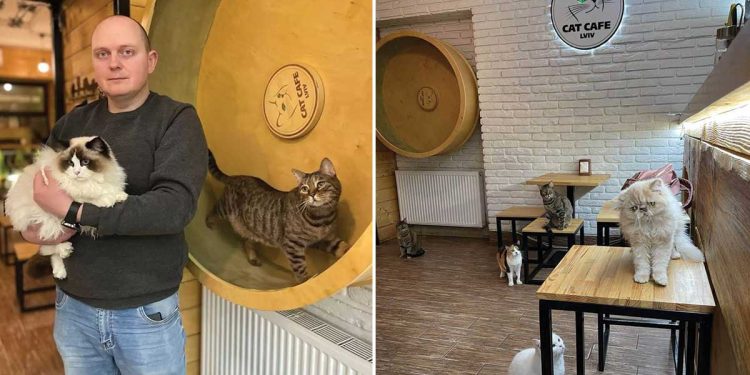 A famous Ukrainian cafe for cats decides to keep opening its doors to serve its customers and protect its adorable cats.

For more than six years, a Ukrainian cat cafe has been open to serve and relax the citizens of the city of Lviv, Ukraine, and means so much to the customers and all the people who work there, who do not think nearby even in war time.

The beautiful business, in addition to being very welcoming to customers, is home to 20 cats who take care of welcoming and entertaining visitors. Cats often hang out with people, while they enjoy a meal, a coffee, or just to relax a bit.

I have a small team of several close people who have worked with me for several years and who have become my closest friends.

The man says his work team has gotten so used to the cats that they help take care of them and even play with them when no one is around.

Generally speaking, Cat Cafe Lviv has been a haven for Lviv residents and has become a place where they can forget about their troubles. Just being able to play with cats or pet them changes their day and cats love the attention.

Currently, due to armed conflicts with Russia, many Ukrainians are fleeing the country, but Serhii has decided to stay with his family.

Our cats have lived in the cafe since they were 4 months old. They are like a family. We realized that we would never leave our country, that it was the only place we could be in the future.

Despite the Russian invasion and the problems that the war brings, Cat Café Lviv remains open to serve the public. The team continues to provide a safe space where people can hang out and say hello to the café cats.

Perhaps many Ukrainians might need to relax for a while and forget about reality in these difficult times.

Currently we have fewer regular visitors, but there are people who have come from other cities because they need hot food and positive emotions.

The cafe has three large rooms for visitors, two of which are located in the basement in the event of an air raid.

The reality is that the café has become a safe place for guests, but especially for the resident cats of the place.

Cat Café Lviv cats are an important part of Serhii’s family, so they will always stay together no matter what.