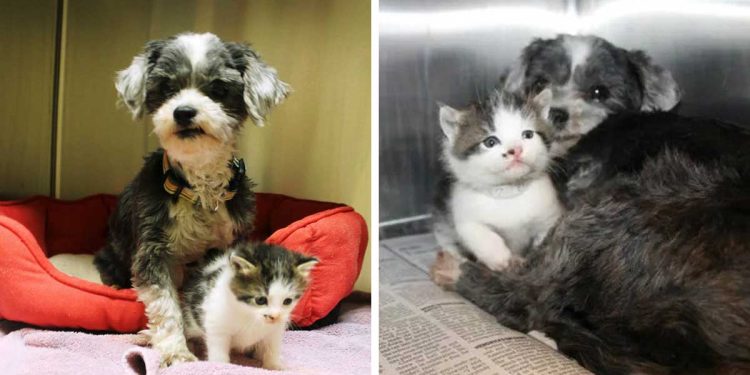 An adorable dog with a noble heart rescued a little orphan kitten abandoned at the bottom of a ravine.

The tiny Shih Tzu puppy found the kitten deep in a ravine behind a Home Depot in South Carolina. The orphan kitten was near a stream, without any protection, fortunately a generous and caring soul appeared to help him.

Local residents heard the dog barking desperately as if asking for help, so they called local animal control. Anderson County PAWS, answered the call from neighbors and approached the scene to observe what was happening.

A dog rescued an abandoned kitten

Officer Michelle Smith took over the investigation, discovering the dog at the bottom of the ravine tending to a small, needy kitten. When she found them, she found them, the dog was nursing the little feline, and also protecting him with his body, as if it were his own.

The woman believes the dog heard the kitten and decided to come downstairs to see what was going on, then stayed by her side to take care of her.

Although the noble-hearted animal had the ease of leaving the place, he did not want to abandon the feline, he wanted to get help in some way. The two were taken to the shelter, where they were treated and checked for their state of health.

At the shelter, the sweet adoptive mother continued her work and continued to nurse the kitten, take care of her and clean her like a real mom.

In no time, Goldie (dog) and Kate (kitten), they stole the hearts of all their caregivers and people who knew the story of the rescue.

It’s an example of why I love my job.

Joe and his wife learned the story of the two animals through the news and immediately knew they had to adopt them. The couple therefore wrote a letter to the shelter asking to be the new parents of Goldie and Kate, but the request had to be considered.

After a while and making sure that the two animals were in good health, they began to analyze the offers of adoption. They studied the request of the interested couple and realized that it was the ideal home for sweet Goldie and Kate.

They have finally arrived in their new home where they are now enjoying their new life full of comfort, but above all full of love.

Thanks to the courage of Goldie, Kate was able to have a second chance in her life and, surely, they will be together forever.